What is an earthquake?

An earthquake is a natural hazard that damages the land we live in and us humans as well. It is one of the most frightening events on earth. It occurs naturally and has large consequences if an earthquake was to happen to your city. They often strike without warning and shakes the ground so violently, causing great destruction such as buildings collapsing, blocking of roads, injury to people and damaging the earth's natural landscape. It can also crush thousands of people to death in seconds. Earthquakes are unpredictable and uncontrollable, even though they have been carefully studied for decades. This follows a snowball effect wherein it causes financial loss or diseases for the country and its citizens.

Earthquakes are measured using a seismometer. It detects the vibrations caused by an earthquake and plots these vibrations on a seismograph.
The strength, or magnitude, of an earthquake is measured using the Richter scale. The Richter scale is numbered 0-10. Earthquakes measuring just 1 or 2 on the scale are common and can happen everyday in places like San Francisco. These are so small that people cannot feel them, they can only be detected by a seismometer. Earthquakes measuring around 7 or 8 on the Richter scale can cause devastating damage.

Earthquakes are measured using magnitude, velocity (how fast the ground is moving), acceleration (how quickly the speed is changing), frequency (seismic waves) and duration (how long the strong shaking lasts).
Here is a video on the Sendai, Japan earthquake in 2011 shot inside a building.
We can see that the people are actually under desks and tables, so that falling objects would not hit them.

How Do Earthquakes Happen? 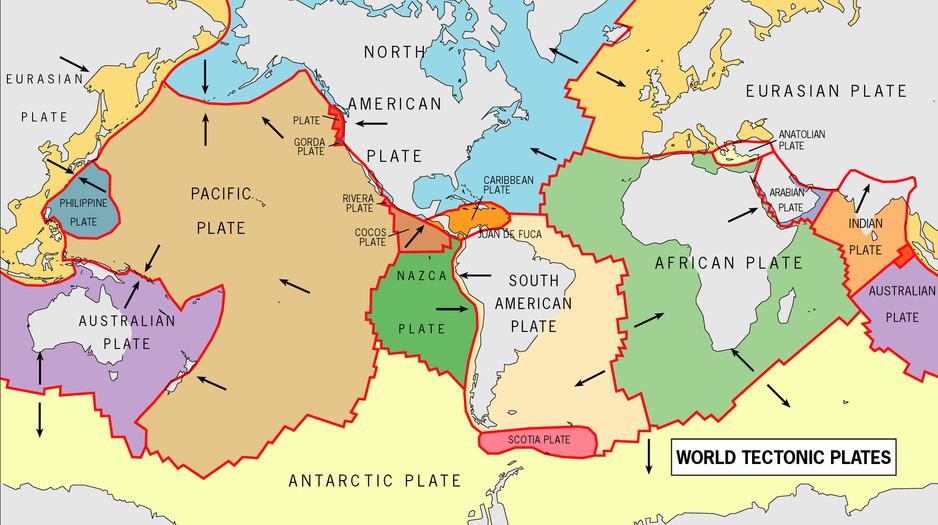 Tectonic plates slide past each other and bump into one another, causing the plate boundaries to get stuck since the edges are rough. When it has moved far enough, the edges unstick on one of the faults and there is an earthquake. The energy from the plates radiate outward from the fault in all directions. These are called seismic waves. They are caused by the sudden breaking of rock. They are like ripples on a pond. They shake the earth as they move through and when they reach the surface, they shake the ground and anything on it. 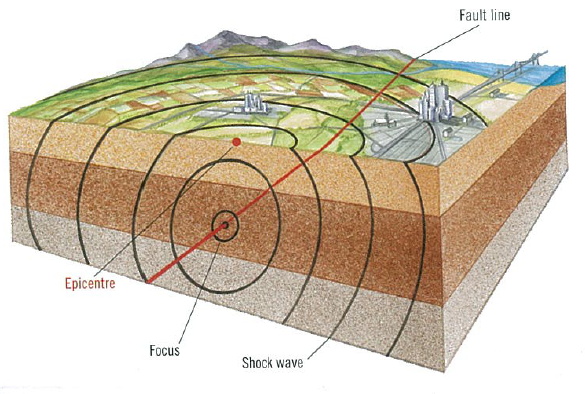 There are two types of seismic waves - body waves and surface waves.

Body waves travel through the earth's inner layers and arrive before surface waves. These waves have a higher frequency.

The first kind of body wave is the primary wave. This is the fastest kind of seismic wave. They can pass through solids, liquids and gases easily. As they travel through rock, the waves move tiny rock particles back and forth; pushing them apart and then back together, in line with the direction the wave is traveling.  Animals can hear primary waves.
Click here to see a primary wave in action
The second type of body wave is the secondary wave, which is the second wave you feel in an earthquake. This is slower than a primary wave and unlike primary waves, secondary waves don't move straight through the Earth. They only travel through solid. Secondary waves move rock particles up and down, or side to side; perpendicular to the direction that the wave is travelling in.
Click here to see a secondary wave in action
The other type of seismic waves are surface waves. They travel only through the earth's crust. They have a lower frequency than body waves. Even though they arrive after body waves, these are the waves that are responsible for the severe damage and the destruction of buildings and other structure, because they move up and down the surface of the earth, causing buildings and other structure to rock. The most intense surface waves come from the epicentre. The most intense shaking usually comes at the end of an earthquake. 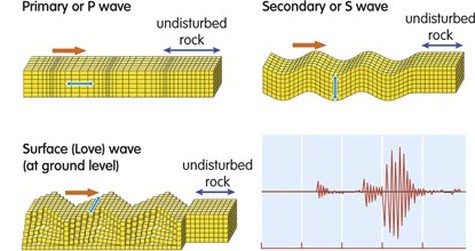 The sudden, intense movement along faults are the main sources of earthquakes.

Earthquakes in Australia are usually caused by movements along faults as a result of compression in the Earth’s crust. Fortunately however, even though Australia does get earthquakes, the damage is only minor because Australia is located in the middle of the Indo-Australian plate. It experiences no volcanic activity and only few earthquakes. It is highly stable and it has experienced no building of mountains in the last 80 million years. The biggest quake ever recorded in Australia was in 1941, at Meeberrie in WA, with an estimated magnitude of 7.2. Fortunately it struck a remote, largely unpopulated area or it would have caused devastating effects to the community and nearby suburbs. Today, Australia is moving towards Indonesia and Papua New Guinea at a rate of five centimetres a year, being able to reach the equator in around 50 million years.

Highly destructive and constant earthquakes occur mostly in Japan because it is located in the Pacific Ring of Fire, on the edges of several tectonic plates. They include the North American plate, Eurasia plate, Pacific plate and Philippine Sea plate. When two or more of these plates slide against each other it creates friction as they get closer together and pressure builds up. When there is a movement of a plate going on top of another, the sudden shaking causes an earthquake.

The Pacific Ring of Fire is a horseshoe-shaped area that includes countries that are prone to earthquakes. It has 452 volcanoes and 75% of the world's dormant and active volcanoes. Countries within the Pacific Ring of Fire include Chile, Mexico, United States, Russia, Japan, Philippines, New Zealand, Papa New Guinea, Indonesia, Canada, Peru, Taiwan and Guatemala. About 90% of the world's earthquakes occur on it. The effects the the ring of fire have on Australia are very little because the faults along the ring of fire do not pass Australia.

Why Do People Often Live on Tectonic Plate Lines?

People often live on tectonic plate lines for several reasons. In the case of Japan where it is prone to many earthquakes, their land is fertile ground. Plate boundaries are usually near the ocean, and people live near the ocean due to historical reasons because we need food and water. Also, the ocean currents and distance from the ocean provided a more suitable weather for the citizens living by the shore (warmer winters and cooler winters). Even though today we have better access to technology, we still live in earthquake prone areas because we need it for trade, food (50% of the world's population depends on fish and other marine creatures) and climate (it provides us just the right amount of temperature to cool and heat our bodies to make our lives easier). Volcanic areas tend to have fertile soil because of their ash so plants grow well, that aids us with farming and provides very good farmland (any plant could be grown after a volcanic eruption). Volcanoes also provide as a means of a tourist attraction, so people can make money out of tourists. Volcanoes also produce geothermic energy (heat from the earth) and this can produce electricity. Land near tectonic plate boundaries tend to also be rich in mineral supply, so it helps with mining and job opportunities. Some families have also lived and grown up there so they might prefer to stay where they are. People also visit these areas for skiing, hiking and going to hot springs.

Even though people know that these areas are prone to earthquakes, they do not believe that an earthquake would happen in their lifetime and are prepared to take a gamble because of good weather conditions, good climate, trade, marine food, have fertile ground, are rich in minerals (gold, silver) and provide good tourist attractions, because people only desire wealth and want materialistic goods.

Can Earthquakes Be Predicted?

No. Earthquakes cannot be predicted for several reasons. One of them is that no one has enough of an understanding about the conditions—the rock materials, minerals, fluids, temperatures, and pressures—at the depths where quakes start and grow to be able to predict them.

“We can create earthquakes under controlled conditions in a laboratory, or observe them close-up in a deep mine, but those are special situations that may not look very much like the complicated faults that exist at depth in the crust where large earthquakes occur,” says Michael Blanpied, associate coordinator of the USGS Earthquake Hazards Program. “Our observations of earthquakes are always at a distance, viewed indirectly through the lens of seismic waves, surface faulting and ground deformation. To predict earthquakes, we would need to have a good understanding of how they occur, what happens just before and during the start of an earthquake, and whether there is something we can observe that tells us than an earthquake is imminent. So far, none of those things are known.”

Earthquakes start small, usually on an isolated section of a fault and afterwards, grow quickly.

“That nucleation can occur anywhere, and even when we have examples of repeated earthquakes, they may nucleate in different places,” he says. “If there is a process that occurs in the seconds or minutes, hours, months before an earthquake, that process may be very subtle and hard to observe through miles of solid rock, especially when we don’t even know where to look.”

Knowing the date of the last earthquake helps with forecasting. Scientists can then estimate whether they are early or late based on the times of earthquakes on that particular fault. For example, at the Hayward Fault in San Francisco, large earthquakes happen every 140 to 150 years. The last earthquake was in 1868, so scientists think that fault could have another earthquake at any time. This means however, tomorrow or twenty years from now.

In the 1980s, the US Geological Survey predicted that in five years, there would be an earthquake on the San Andreas fault with a magnitude of 6.0. The earthquake did not happen until 2001.

At the moment, forecasting is the best scientists can do. Even though it is not very accurate, determining the chance of an earthquake happening helps engineers and architects to make good decisions about where to build and their building codes and designs.

Scientists at the USGS are working to figure out how to better predict these events. They create earthquake imitations in a lab, drilled holes in the San Andreas Fault Zone to get a look at the conditions and study ground deformation using GPS sensors to understand how stresses build up on faults. This research will help create an early warning system similar to Japan’s, which would give people between a few seconds to a minute to get away from the earthquake's epicenter to get to a safe place, slow or halt public transportation, clear traffic off bridges, and more.

To summarise, earthquakes are a very complex phenomena. They all depend on tectonic plates and their fault lines. Scientists do not have enough information from deep within the earth to make accurate predictions. All of these are buried deep in the earth that no one (at least for now) can measure it to tell what really is happening, so no one is able to predict earthquakes. In the future, improvements in prediction and preparedness should further minimize the loss of life and property during earthquakes. However, it will be a long time before we will be ready and prepared for an earthquake. Just like severe weather and diseases, earthquakes are unavoidable. All we can do right now is increase our understanding of the phenomenon and develop better ways to deal with it.