Before building, engineers evaluate the seismic activity of the area where they are building at. In the USA, they have the 'National Seismic Hazards Maps' from the US Geological Survey (USGS). These maps show the ground motion. Geologists then try to make an educated guess about ground motions from future earthquakes using earthquake data from the past.

This shows which areas of the US have the highest earthquake hazard.

“If our buildings are strong,” Michael Blanpied, associate coordinator of the USGS Earthquake Hazards Program, says, “then it does not matter so much [if we can predict large earthquakes] because we’ll be safe no matter when the ground happens to shake.”

In the US, they have an 'International Building Code'. They tell information about how to design structure so as they would not collapse based on the map above. Once engineers determine the seismic risks of a site, they start building. However, they must avoid irregular or asymmetrical designs like L-shaped or T-shaped structures. Ornaments are also limited like cornices or fascia stones because earthquakes can easily break these. In general, engineers and architects try to build and design symmetrical buildings so that they are able to withstand seismic waves.

If a building's foundation sits on soil, the whole building may collapse in an earthquake because of liquefaction regardless of the advanced building techniques For example, earthquakes often knock buildings off from their foundations. Over the recent decades, engineers have developed building codes so that buildings may not collapse when an earthquake occurs. These include:

Taiper 101 is one of the world's tallest skyscrapers. It is 508 metres tall. It consists of an active mass damper at the top of the building. It is formed by eight steel cables and connect to eight dampers. If the building sways, the damper counteracts the motion, reducing vibrations that could cause stress on the structure. 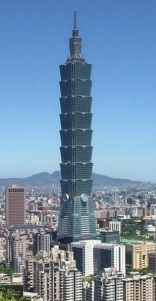 In earthquake prone countries, buildings are made earthquake resistant. Deep foundation and massive shock absorbers are laid down to lessen the kinetic energy of seismic waves. Skyscrapers are made so that they sway during a quake and not collapse. A building consists of columns, beams and bracing so as to transfer seismic forces to the ground. Engineers often build walls using braced frames, which depend on trusses to resist sideways motion.

In San Francisco towers a skyscraper called the 'Transamerica Pyramid' with an outstanding height of 260 metres. It is the tallest building in San Francisco and the eighth tallest in the world. The building's foundation is 2.7 m thick. The building uses trusses that have bracings that are x-shaped. It is resistant to the seismic waves. There are also interior frames other than exterior frames. The result is strong, fairing well during an earthquake. For example, during the Loma Prieta earthquake, which had a magnitude of 7.1, the top story of the pyramid swayed more than 30 centimeters from side to side, yet suffered no damage. 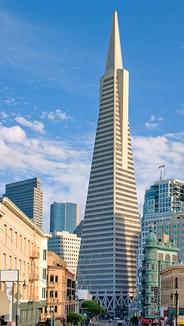 Greg Deierlein of Stanford University and Jerome Hajjar of Northeastern University have designed a structure with fuses that collapses on purpose and then reform after the quake subsides.

“The building, in a sense, sacrifices itself to save the occupants,” says Gregory Deierlein, a Stanford University civil and environmental engineer.

They tested the structure on Japan's E-Defense shake table (the world's largest earthquake simulator). The fuses, made out of steel, successfully absorbed the shock of the earthquake which was more than magnitude 7.0. Afterwards, the deformed fuses could be replaced in around four days. 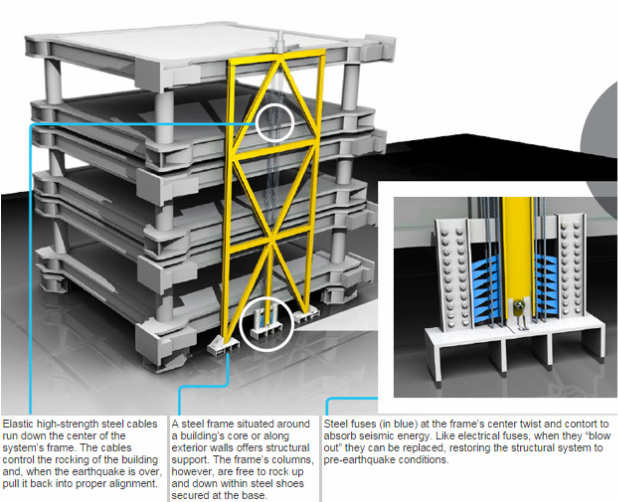 In Cary, North Carolina in the United States, Lord's Corporation's labs and the University of Notre Dame researchers have developed a product that can reduce the damage caused by earthquakes. It is called magnetorheological fluid (MR fluid), which is used inside dampers to make buildings stable. MR fluid is a liquid that changes to a near-solid when exposed to a magnetic force, then back to liquid once the magnetic force is removed.

Dampers filled with the aforementioned fluid mitigate vibrations of buildings during an earthquake.

Another innovation is the seismic invisibility cloak. To do this, engineers would bury up to 100 plastic rings beneath the foundation of a building. When waves meet the rings, they enter and then become compressed. The waves just pass by, just beneath the building's foundation, exit the rings and resume their original speed.

The Japanese company Air Danshin developed a levitating house. It works by putting a deflated air bag under a house and when sensors feel an earthquake, they pump air into an airbag, inflating it and lifting the entire house around three centimetres off its foundation. 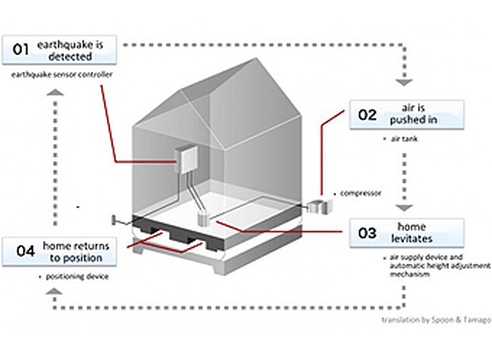 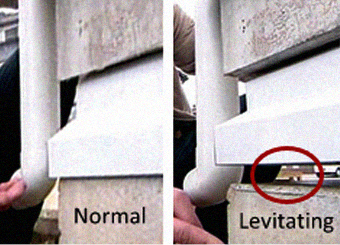 People who study earthquakes are called seismologists. They look for ways to predict when and where earthquakes will strike. However, since earthquakes gives few warning signals, in countries located in the Pacific Ring of Fire, earthquake survival relies on being prepared.

How to minimise earthquake risks: